To: President Rodrigo Roa Duterte and Secretary Roy Cimatu of the DENR 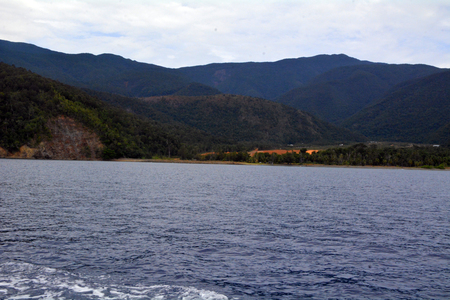 STOP THE MINING OPERATIONS NOW AND TO REVOKE ANY MINING AGREEMENTS WITH AUSTRAL ASIA LINK MINING CORPORATION AND HALLMARK MINING CORPORATIONS, BOTH UNDER THE CORPORATE ORGANIZATION OF ASIATICUS MANAGEMENT CORPORATION (AMCOR) AT MAGUM, PUJADA BAY AND SALINGCOMOT, MATI CITY, PROVINCE OF DAVAO ORIENTAL.

We the Church people together with the farmers, fisherfolks, youth, professionals, the academe of Davao Oriental together with our national and international advocates hereby urge Hon. Roy Cimatu, DENR Secretary, TO STOPTHE MINING OPERATIONS NOW AND TO REVOKE ANY MINING AGREEMENTS WITH AUSTRAL ASIA LINK MINING CORPORATION AND HALLMARK MINING CORPORATION BOTH UNDER THE ASIATICUS MANAGEMENT CORPORATION (AMCOR) IN MAGUM, PUJADA BAY AND SALINGCOMOT, MATI CITY, PROVINCE OF DAVAO ORIENTAL. We are also against any large-scale mining activities in the whole province of Davao Oriental, as they are apparently detrimental to nature. The Mineral Production Sharing Agreement (MPSA) was issued on June 8, 2004; hence, in 2020 they have been mining for 16 years already and still have 9 more years before the twenty- five years agreement expires!

During these sixteen (16) years of mining operations, the residents of the localities have witnessed the deteriorating conditions wrought by the mining lodged between two protected areas: MT. HAMIGUITAN -proclaimed as a Wildlife Sanctuary (R.A. No. 9303) and a UNESCO World Heritage and PUJADA BAY - declared as a Protected Landscape/Seascape (R.A.7586, Executive Order no. 431 July 31, 1994). Likewise, Pujada Bay was also declared one of the Most Beautiful Bays in the world during the 15th World Bays Congress in Toyama prefecture, Japan held from October 16-20, 2019. In addition, the forested area of barangay Cabuaya in Mati City which is also located near the region was also declared a protected area as it is the natural habitat of the endangered Philippine Eagle.

In Mt. Hamiguitan, the cutting of trees not excluding the pygmy forests and watershed areas, had caused forest denudation, soil erosion and siltation. The residents decried lamentations on the decreasing water supply to their communities. They were likewise saddened with the discovered wastage of cut logs left untended until they were rotten. There was also no rehabilitation nor replacement of cut trees. In Pujada Bay, researches on nutrient mapping showed its risk on eutrophication, reducing productivity and declining marine life diversity.

Once more, we reiterate our main contention on opposing these mining corporations even at the onset of their mining application. Based on the study published on http://bhpbilitonwatch.net/2009/10/21pujada-hallmark-nickel laterite-project profile/, some 4,778 hectares of mining permits overlap on five major drainage water systems and watersheds which either drain to Pujada Bay or to the Davao Gulf. These bodies of freshwater are the main water supplies for the communities living within and around the area. Additionally, the Pujada region is situated on the Pacific Cordillera fault line. The 2008 report “Philippines: Mining or Food” recommended that “no mining should take place on Mt. Hamiguitan or near Pujada Bay which are centres of biodiversity with high ecotourism potential.” Under these conditions, any mining activity in the area should be strictly prohibited.

The loss of forests and woodlands entails loss of species which may constitute extremely important resources in the future – not only for food but also for curing diseases and other uses. Different species contain genes which could be key resources in years ahead for meeting our needs and regulating environmental problems (Laudato Si # 32). With their extinction, they will no longer give glory to God in their very existence nor convey their message to us. People have no such right! (Laudato Si # 33).

The Philippines is one of the 17 richest countries in the world in terms of biodiversity; with more than half of it, found nowhere else on earth! In the final report: Philippine Biodiversity Conservation Priorities (2002), there was an appeal to take action now...“We are simply running out of time to meet the biodiversity crisis”

Researches done by DOSCST have shown decreasing diversity indices of the different species on both Mt. Hamiguitan and Pujada Bay (2017- E 17; 2015 P8). Studies on Blue Carbon Stock Assessment (2016- D 4; 2017, D 5; 2019- E-22) have also shown that coastal vegetative habitats including sea grass resources capture carbon up to 70% in the marine realm; hence part of this threatened biodiversity is a crucial potential climate change mitigation and adaptation strategy!

Because of the dire conditions of Philippine biodiversity, Eugene Linden (Environmental Journalist) and John Terbough (Plant Ecologist) assessed that our country was already being damaged beyond repair. But the DENR and the Biodiversity Management Bureau (BMB) still believe that there is still a small window of opportunity through urgent conservation action... “To stem the tide of destruction before a point of no return is reached.” (Theresa Mundita Lim, Treasures of Philippine Wild, 2014 by BMB and DENR).

From the start of their existence, these mining firms have been existing illegally in violation of the Philippine Mining Act of 1995 (R.A. 7942) Chapter III Sec.19 f – “Areas closed to Mining Applications include ‘old growth or virgin forests, proclaimed watershed forest reserves, wilderness area, mangrove forests, national parks, provincial/municipal forests, parks, greenbelts, game refuge and bird sanctuaries’ as defined by law and in areas expressly prohibited on the National Integrated protected Area system (NIPAS) under Republic Act No 7586, Department Administrative Order No. 25, series of 1992 and other laws.”

Damages had been done and ‘the dangerous point of no return’ might be reached if mining operations are not stopped now. We ought to remember that the environment can exist without us but we can never exist without the environment. We have only one common home: planet Earth and there is no other.