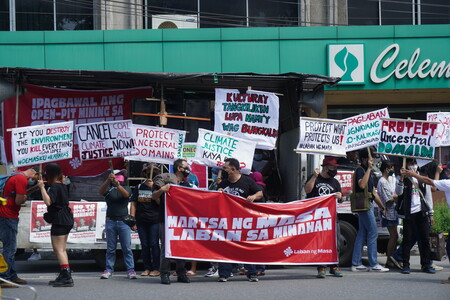 We call the people of South Cotabato to make their voices louder against open-pit mining.

We call on the people of the Davao Region, particularly Davao del Sur, to participate in this issue, as we will also be affected by the impacts of this project.

We appeal to the Provincial Governor of South Cotabato, Reynaldo Tamayo, Jr., to listen to the voices of the people and veto the amendments to the Environment Code. As the maxim goes, “Salus populi est suprema lex”. The government of South Cotabato should always keep in mind that the welfare of the people is the supreme law.

In these times of pandemic, climate emergency, and increasing population, protecting our watersheds for many generations is ot mere compliance but rather an indispensable action of our generation.

Watersheds are geographical ecological units, and what happens in one part of the watershed will influence the whole watershed from forests, agricultural, urban, and coastal to estuarine ecosystems due to its geomorphological characteristics, connected rivers and tributaries at the surface, and including groundwater reserves.

Open-Pit or Strip Mining is a metallic mining method assessed as one of the most extensively difficult to mitigate and manage; its impacts do not focus on one contained area. It also requires mass deforestation and removing 20-30 meters of the laterite zone to access the metallic resources underneath. This large-scale industry demands enormous hectares of land for operational processes from stripping, extraction, and tailings treatment, to ship loading and refinery. Furthermore, the Tampakan Open-Pit Mining will demand and use groundwater resources and transport highly toxic wastewater through a 150-km pipe from the Municipality of Malalag draining to Davao Gulf. There is a treatment process presented, however, the risks of overland flow, flooding disasters, or possible collapse of tailings ponds will inevitably impair marine and aquatic biodiversity, fish stocks, and aquaculture in the coastal areas, similar to the incident in Mapagba River in Banaybanay last January 2022.

The Open-Pit Mining in Tampakan will hugely affect the long-term viability and sustainability of these watersheds that currently provide ecological services and natural resources to the people of South-Central Mindanao.

The Tampakan Open-Pit Mining will become the largest mining in Southeast Asia. According to the project information, it is estimated to extract 2.94 billion tons of metallic resources, 15 million tons of copper, and 17.6 million ounces of Gold. According to S&P Global Market, Open-Pit mining emits a vast amount of greenhouse gases than underground mining methods. On average, copper mining emits 2.3-2.5 tons of Carbon Dioxide (CO2) per ton of metal and nearly 1 ton of CO2 emitted per ounce of gold produced. Combining both Copper and Gold extractions, it is estimated that around 55 million tons of CO2 will be added to the country’s greenhouse gas contribution. Hence, this is ironic to our country’s commitment during the United Nations Climate Change Conference (COP26) in Glasgow that said it is moving ahead with urgency in cutting greenhouse gas emissions and committed to reducing its emissions by 75% in 2030.

This afternoon, Governor Reynaldo Tamayo finally vetoed the resolution enacting Ordinance No. 23 Series of 2022, amending the Environment Code lifting the Open-Pit Ban in South Cotabato. Governor Tamayo said that he didn't see any compelling reasons as to why the Sangguniang Panlalawigan would amend the decade-old ordinance that protects the people of South Cotabato from the impacts of open-pit mining.

The possibility of this decision being overridden by the current Board Members of the Sanggunian is still high. We are hopeful that the ban on open-pit mining will remain. We also hope that the Board Members who will sit in the Sanggunian will put the environment as their priority focus and not betray the call of the people they need to serve and protect.