Due to the opposition from environmental activists, the event was called off https://www.bicolmail.net/single-post/2017/08/17/Environmentalists-buck-festival%E2%80%99s-flying-lanterns 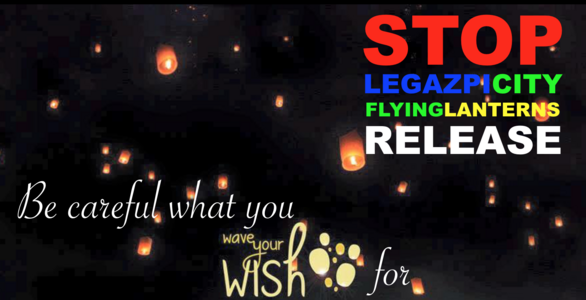 On August 16, 2017, for the price of Php150.00, a Facebook post of a page called "Legazpi City Albay" (https://www.facebook.com/510888042351492/photos/a.553160814790881.1073741972.510888042351492/1426518707455083/?type=3&theater) invites everyone to get a big flying lantern with a special piece of paper to write their wishes on; however, the Office of the City Environment and Natural Resources of Legazpi City, Albay, is mandated to "formulate, implement and pursue plans and programs that would promote ecological Balance that could maintain a wholesome and hygienic environment along the framework of sustainable development." "The Wave Your Wish Ceremony is all about positivity - promoting self enlightenment and hope", hence, all of us should be enlightened that such an act of dumping waste is not good for the environment. We need to give hope to future generations, a clean and sustainable future. This activity may be in violation of Republic Act 9003 - mismanagement and improper segregation of waste. Likewise, of the fisheries code and wildlife act, among others.

1. What goes up must come down, and farmers in ­particular have become increasingly ­concerned that livestock might swallow a lantern's wire or ­bamboo frame, or, even worse, that fires might break out in hay barns. Elsewhere, coastguards say lanterns, which can travel for several kilometres and to an ­altitude of 1,000m before the candle burns out, are routinely mistaken for distress flares. A handful of east Asian countries, such as ­Vietnam, Malaysia and Thailand, have already introduced bans, particularly in the lead up to ­major festivals. (https://www.theguardian.com/environment/2010/feb/02/sky-lanterns-danger-farm-animals)
2. Countries like Argentina, Austria, Australia, Brazil, Chile, Colombia, Costa Rica, New Zealand, Spain, Germany, and parts of Canada and the USA have actually already banned the release of sky lanterns. (http://www.wheninmanila.com/why-we-should-not-release-balloons-skylanterns/).
3. However, the worst part of the fallout from the activity is the impact on local fauna. Reports of animals dying painfully, typically strangled by old lanterns' wires or suffocated by undecomposed paper, are frequent during this time of year. Some visitors are no doubt already aware of this, particularly following the high-profile death of an owl in the U.K. a few years ago. The bird was found suffocated and partly burnt inside the remains of a lantern... Humans are also at risk. The light emitted by lanterns sent en masse at night has been proven to be disruptive to aircraft pilots. As such, some countries like Malaysia have banned the use of sky lanterns in and around certain cities in order to prevent fatal accidents. (http://www.chinapost.com.tw/editorial/taiwan-issues/2017/02/10/491229/pingxis-sky.htm)
4. Though they are undoubtedly beautiful, even the biodegradable lanterns can be incredibly harmful to both the environment and wildlife. Sky lantern litter takes quite some time to decompose, and the wire frames have been known to strangle and maim wild animals and livestock. They also pose a significant fire hazard. Not only have they caused multiple wildfires, a sky lantern was also responsible for a massive fire at the Smethwick Recycling Plant in West Midlands, England. (http://earth911.com/living-well-being/events-entertainement/environmental-impact-traditions/)
5. With Save Philippine Seas, know more about the ills and harms of sky lantern releases here: https://www.facebook.com/pg/savephilippineseas/photos/?tab=album&album_id=1318238384932367

How it will be delivered

With enough signatures we plan to talk to the organizers of the event to convince them that it is not necessary to do an event so harmful and wasteful. We propose a zero impact alternative such as a green collective meditation event, growing trees, coastal clean-ups, among others. Alternatively, to ensure proper waste management and safety, lanterns can be tied by strings and held by the participants to 'hold on to their wishes' and make them come true.

Petition is successful with 762 signatures