To: Local Government Unit of San Mateo, Isabela and Muñoz, Nueva Ecija and The Director of Bureau of Plant Industry

Stop the field trial and impending direct use of Golden Rice! 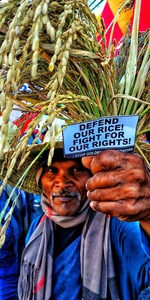 We call upon the local government unit of San Mateo, Isabela, Muñoz, Nueva Ecija and The Director of Bureau of Plant Industry to heed the call of farmers and consumers for the immediate moratorium of field trial of Golden Rice.

Golden Rice, a rice variety that is genetically modified to produce Vitamin A, is touted as a solution to Vitamin A deficiency (VAD) in the Philippines. However, Golden Rice will only bring more problems to health, environment and farmers rights.
Here’s how:

• Rice, the staple food of Filipinos, will be subjected to unsafe genetic modification

• Golden Rice is a concern of everyone; if something unexpected turns out in the process of genetic engineering the consequences would be catastrophic. Golden Rice proponents will subject the Filipinos’ staple food to a technology that is not proven to be safe, more so effective. Genetic modification alters the original genetic make-up of the organism, producing new chemical products that can have negative, unintended and uncontrolled consequences. GE crops can pose harm to those who will eat it, proof of which are the numerous peer-reviewed studies stating that GE crops are unsafe to eat.

• It will be nearly impossible to recall GMOs as they are capable of reproduction. GMOs contaminate our food and agriculture thru cross pollination, seed mixing or thru accidental or intentional releases. Our rice varieties, totaling to about 4,000 varieties whose genetic diversity can be tapped to combat climate stresses and alleviate nutritional problems, are at risk of contamination.

• Golden Rice does not offer new solutions. Beta carotene, which Golden Rice promises to deliver, is a nutrient that exists naturally in many food crops. It is present in crops in quantities greater than Golden Rice, such as malunggay, kalabasa, saluyot, kamote, carrots and other green leafy vegetables and yellow colored fruits and root crops. While widely available, easily grown and contains more beta carotene than Golden Rice, poverty hinders the Filipino people access to these safe and nutritious foods. Add to this the absence of fats in their diets required for the absorption of Vitamin A.

• VAD exists among the population, but there are existing and proven steps in curbing Vitamin A deficiency. These interventions include fortification of food and Vitamin A supplementation by the Department of Health (DOH) of the Philippines. To date, the percentage of children aged 0-5 years with VAD have already went down to about 15% in 2008, mainly from these interventions. Same goes in the case of pregnant and lactating mothers, wherein the cases of VAD also dropped within the threshold level.

• Consumer rights to information and food safety is being put at the wayside, such as the absence of labels in foods containing GMOs. The pro-Golden Rice also group ignores safety tests, and to date no tests were conducted to ascertain safety of Golden Rice. Children’s’ rights were also disregarded, as was seen in the case of the secretive and illegal Golden Rice feeding trials to young Chinese children.

• Questions are also being raised about Golden Rice’s role in curbing VAD. Is Golden Rice a food or a drug? If it is a drug that will cure VAD, proper dosaging of Golden Rice should be implemented and regulated, which will deem it very impractical and may pose problems such as overdosing due to overconsumption.

• The pro-GR camp is using victims – the children suffering from VAD - as leverage to rush the approval of the said crop. They have also held groups against the introduction of Golden Rice responsible for the death of children suffering from VAD. These claims are baseless, as Golden Rice is still not ready for release and no proofs of its effectivity in addressing VAD were presented. IRRI, the lead proponent in the development of Golden Rice, divulged that the yield of Golden Rice is very low and would take another two years before it will be ready for cultivation.

• The regulatory agencies in the country are lax and pro-GMO. To date, there is also no single law that governs GM commercialization or protection of the people from unwanted effects brought about by GM crops.

• Golden Rice is a product of private corporations using the public institutions to mask their intent in controlling food and agriculture. Golden Rice is a property of Syngenta, one of the biggest Agrochemical TNC in the world. Syngenta has partnered with IRRI and created the Golden Rice Human.