Start a Campaign
We'll connect you to help and tools every step of the way.
About Us Terms and Conditions

No to WTE incineration in Davao! Go for genuine zero waste solutions!

1.) WTE incineration is known to cause health and environmental problems to surrounding communities. Burning municipal waste produces pollutants that persist in waterways, air, and surrounding farms for decades. The process creates dioxins and furans which are known to cause respiratory and reproductive diseases, birth defects, and cancer. WTE will not only harm the already marginalized low-income agricultural communities in Barangay Biao Escuela and surrounding barangays in District 1 and 3 of Davao City; its toxic by-products may reach our plates through the food chain. The proposed WTE site in Davao is located just 2.2 km from the elementary school, and 550m from a relocation site. Its impacts may also reach those living within and beyond the 10-km radius of the facility. Our fate may become similar to several cases of pollutant exposure in several parts of the world. For example, people in an urban area hosting two waste incinerators in Italy were found to have higher concentrations of metals barium, manganese, copper, and vanadium that have accumulated in their bodies (Di Ciaula et al., 2020). In Japan, children studying in schools near municipal waste incineration plants were reported to have experienced wheezing, headache, stomach ache, and fatigue (Miyake et al., 2005). Locally hired workers may also be exposed to toxins like those incineration plant workers in Shenzhen, China who were found to have high levels of phthalates and bisphenols (Lu et al., 2020). 2.) WTE worsens the climate crisis. Burning of waste releases greenhouse gas emissions. Even the European Union is defunding WTE incinerators with the realization that such facilities do not contribute to climate action. WTE also cannot be considered renewable energy because the feedstock will come from plastic waste, which are products of fossil fuel extraction. 3.) WTE is expensive, yet produces minimal energy compared to genuine renewable energy resources. Instead of reducing waste at source, it encourages production of more waste in order to feed the facility. The proposed WTE project of Davao City requires a minimum of 600 tons. At 30% residuals, Davao City wastes are only 180 tons per day: a shortfall of 420 tons. This produces minimal energy despite capital expenses reaching Php 5 billion. This will cause a huge drain on the city’s finances because of compensation obligations to the special purpose company. To make up for these arrangements, the public will shoulder the cost through payment of higher tipping fee. 4.) WTE threatens the job security of waste workers. WTE will displace workers in the formal and informal waste industry such as waste pickers, recyclers and haulers, as well as from the numerous companies and groups who upcycle, recycle and compost. 5.) WTE violates the Clean Air Act, Renewable Energy Act, and Ecological Solid Waste Management Act. The proposal also didn't undergo proper community consultation. As of writing, the project does not have an environmental compliance certificate (ECC), yet the land for the facility has already been bought by the city government of Davao. 6.) The Philippines has limited technical and financial capacity to regularly monitor emissions such as dioxin, furan, and other toxic WTE by-products. 7.) The technology proposed by Japanese contractor NSENGI is a grate stoker furnace-type, which is a relatively old waste treatment technology that is incapable of burning waste at a safe temperature. Solid by-products such as toxic ash cannot just be disposed in the municipal landfill since these are hazardous wastes. Thus, a new landfill will still be opened just for the hazardous ash from the incinerator. 8.) The establishment of WTE facilities will encourage Global North countries to dump their waste in the Philippines, a practice which still happens to this day. Davao can and should commit to genuine Zero Waste approaches and join the many other communities around the world who have committed and set Zero Waste targets. This can be done through supporting communities to properly implement the Ecological Solid Waste Management Act (RA 9003). For example, Barangay Potrero in Malabon was able to divert 80% of its solid waste from landfills through composting and recycling. This resulting in daily savings of Php 15,000 from hauling and tipping fees while generating 65 jobs. In the city of San Fernando, Pampanga, the implementation of Zero Waste has resulted to 80% waste diversion. They were also able to save Php 20 million in the process. We need not go far to find another model Zero Waste community. In Davao City's Purok Onse, Barangay Tacunan, the homeowners and the barangay, through the support of Sustainabe Davao Movement, were able to reduce the monthly volume of waste sent to the landfill by 3000 kgs, after only 7 months of implementing Zero Waste solutions such as scheduled collection of segregated waste, door-to-door collection of food waste, weekend recyclables deposit, and sari-sari store refilling stations. Still in Davao City, Barangay Mintal was able to divert an average of 2 tons of food waste per month and 6.7 tons of recyclables per month, through collecting segregated waste from food establishments and households, empowering resource collectors, and partnering with junk shops and a food upcycling company. The program also yields an average of Php 45,822 monthly income from sales of recyclable materials. We foresee that waste diversion will further improve if the LGU supports this kind of solid waste management program that is clearly safer, more productive, and more sustainable compared to incineration. These model communities in the Philippines show that Zero Waste is possible, without the polluting and costly presence of WTE incinerators. 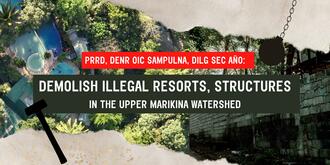 The Upper Marikina River Basin Protected Landscape is Metro Manila and Rizal Province's natural defense against the climate crisis, increasing flooding and landslides, and the loss of clean water. Despite many laws and policies that protect it from exploitation since 1904, the failure of environmental enforcement has led to a disappearing forest cover of only 11%, based on an ongoing study. If this continues, scientists predict that the watershed will only have 5% forest cover left and will ultimately lose its ability to protect Filipinos from impending disasters. Habitats of endangered trees, birds, and other biological heritage will also be destroyed.

It’s Time to Reveal, Reduce, and Redesign for Lazada and Shopee!

The E-Commerce industry has been growing at an exponential rate, projected to be worth more than $300 Billion by 2025. In the Philippines, the industry grew last 2018 by as much as 31%, outpacing the global growth rate of 21%. This is apparent in the huge popularity of e-shopping platforms such as Lazada and Shopee, where we have come to expect to have big monthly sales. Once our orders reach our doorsteps, however, we are also confronted with another problem: unnecessary plastic packaging waste. It takes an average of just 12 minutes for plastic packaging to transfer from consumer hands to the trash bin. This problem is exacerbated when we look at the plastic waste we produce annually. Each person contributes around 12.4kg of packaging waste, most of which end up in landfills and left to decompose slowly for hundreds of years. This problem is only magnified because of the current COVID-19 pandemic, where plastic waste is projected to increase by as much as 300%. As much as consumers are responsible for waste disposal, so too are corporations accountable for the plastic they end up producing, especially unnecessary plastic packaging. Sellers themselves have noted this and are doing reduction and reuse strategies on their own initiative. One doesn’t need to look further, our own parents have always reused plastic packaging as a cost-saving technique, and as a waste reduction method! If consumers and sellers are already doing their share for a healthier planet, why can’t corporations take on the same responsibility and accountability? We’re calling the largest E-Commerce Companies in the Philippines, Lazada and Shopee, to be part of the #BetterNormal.
More Campaigns

You can now start, run and deliver your own campaign on local issues that affect your community, with the technology you need at your fingertips.

Every individual has the power to create a more just, fair and sustainable world. If you want to make change, Bataris can help you make a good start!


Bataris is another local term for bayanihan–a well-known Filipino custom referring to the spirit of communal unity and cooperation in order to achieve a common goal.


Bataris is people-powered action! Its principles and concepts spring from people-shared insights and daily experiences. This online petition platform is created for you to use and make the change you want to see in the world.